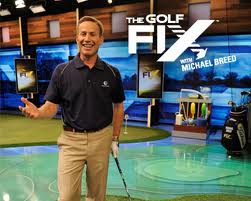 Recently I attended our Carolinas section Teaching Summit at Myrtle Beach. Our feature spreaker was Michael Breed. You might have seen him of the Golf Channels “golf fix”. You know….”The let’s do this” guy. I was interested to see him because you never know how people are in real life as opposed to a television show. I have to tell you that I was presently surprised at some of the things that he shared in his talk. I am always resectful to the guys that are up on stage because I would love to be that guy someday sharing information to other professionals and giving back to the section. So as long as I am in the audience, I try to approach with an opn mind for learning. There are different ways that teachers can do a presentation (teaching theory or motivational). Michael was definitley leaning towards the motivational side of things. So here is how it went.

He opened up his talk by showing a video of himself with people that he had met through his career in golf while he blasted a country song called “I’m a lucky man” which I thought was interesting. He started out with a quote by Chuck Swindoll that states:

“The longer I live, the more I realize the impact of attitude on life. Attitude, to me, is more important than facts. It is more important than the past, the education, the money, than circumstances, than failure, than successes, than what other people think or say or do. It is more important than appearance, giftedness or skill. It will make or break a company… a church… a home. The remarkable thing is we have a choice everyday regarding the attitude we will embrace for that day. We cannot change our past… we cannot change the fact that people will act in a certain way. We cannot change the inevitable. The only thing we can do is play on the one string we have, and that is our attitude. I am convinced that life is 10% what happens to me and 90% of how I react to it. And so it is with you… we are in charge of our Attitudes.” – Chuck Swindoll

Be a Socratic Teacher: definition of “the Socratic Method of Teaching : His most important contribution to Western thought is his dialogical method of enquiry, known as the Socratic method or method of elenchos, which he largely applied to the examination of key moral concepts and was first described by Plato in the Socratic Dialogues. For this, Socrates is customarily regarded as the father and fountainhead for ethics or moral philosophy, and of philosophy in general.

The Socratic method is a negative method of hypotheses elimination, in that better hypotheses are found by steadily identifying and eliminating those which lead to contradictions. The method of Socrates is a search for the underlying hypotheses, assumptions, or axioms, which may unconsciously shape one’s opinion, and to make them the subject of scrutiny, to determine their consistency with other beliefs. The basic form is a series of questions formulated as tests of logic and fact intended to help a person or group discover their beliefs about some topic, exploring the definitions or logoi (singular logos), seeking to characterise the general characteristics shared by various particular instances. To the extent to which this method is designed to bring out definitions implicit in the interlocutors’ beliefs, or to help them further their understanding, it was called the method of maieutics. Aristotle attributed to Socrates the discovery of the method of definition and induction, which he regarded as the essence of the scientific method. Oddly, however, Aristotle also claimed that this method is not suitable for ethics.

A skillful teacher can actually teach students to think for themselves using this method. This is the only classic method of teaching that is known to create genuinely autonomous thinkers. There are some crucial principles to this form of teaching:

The teacher and student must agree on the topic of instruction.

The student must agree to attempt to answer questions from the teacher.

The teacher and student must be willing to accept any correctly-reasoned answer. That is, the reasoning process must be considered more important than facts.

If the teacher makes an error of logic or fact, it is acceptable for a student to correct the teacher.

****I think all great teachers are a form of this. Ask better questions and get better answers.

He then talked about the importance of playing lessons and helping golfers get from the range to the golf course. Here are some mental ideas that might help coaches and players alike:

1. The Law of possibility – He makes the student aware of all of the possible outcomes of each shot and then gets them to focus on the desirable one. ex. it could go left , it could go right but it could also fly at the target

2. If Don’t / Then Don’t – very simple strategy that I teach as well. If you find yourself thinking ” don’t do something”, then don’t hit the shot. start your routine over.

3. What you tell yourself doesn’t have to be true, As long as you believe it. (anyone think of Seinfeld here?). ex. I am the greatest athlete in the world.

4. Try to put the student in pressure situations: ex. crowded first tee or the last hole of a good round. Then you have a chance to help them

5. Watch your language: Do not say if, only say when!

I didn’t realize that his teaching specialty was putting. He considers himself a putting teacher and the tour players that he has worked with come to him for putting info. Likes the old school putting books by Horton Smith (which I own and highly recommend), Willy Park, Bobby Lock. Horton Smith was the first one to discuss hooding or delofting the putter. We know this as a forward press. Michael did a series of tests with different lofted putters and measured the distance. The less loft, the greater the distance the ball rolled because of the contact point on the ball. The more forward the shaft leans, the higher the contact point and better the roll. He recommends 3 degrees of forward shaft lean at impact. He likes the shoulders slightly open to help see the line and the eyes just inside the ball. He doesn’t believe in an arc or plane in putting either. So to conclude, he shared his story of how he got to be where he was.

15 years ago he visited the local newspaper and they let him start to write some golf tips. He then visited a local radio show and offered to do some radio and they gave him a show. In the process he talked a local TV station into letting him do a golf tip on the news. He realized that he was pretty good on tv and he put together a pilot video for show. He submitted it to the Golf Channel 8 years ago and they said no. A few years passed and the Golf Channel gets bought out and wants to create new programming. They find his tape and say, this is our guy. They want to do the show on Tuesdays but he couldn’t do it because he had to do his job at the club. His owners were looking to cut his budget by 25%. He goes to the owners and says, I will cut my salary 25% if you will give me Tuesdays off. They thought he was the greatest. The rest is history. So if you think that he is an overnight success, you are wrong. He just got after it and made things happen. That is what I admire about him the most. Thats why he is up on stage and I was in the audience. I enjoyed the presentation and I hope you enjoy this recap.